Namibia, known for its stark, dramatic and timeless landscapes, is truly a diamond in the rough and one of southern Africa’s best kept secrets. Namibia is situated along Africa’s most inhospitable coastline to the northwest of the Republic of South Africa. Namibia takes its name from the 130 million year old Namib Desert, which uniquely harbors elephant, rhino, lion and giraffe. Namibia is a land of contrasts with towering sand dunes, shimmering plains, sunshine, mountains, gorges, valleys, and the starkly beautiful “skeleton coast”. From the abundant game and bird life to the diverse fish and seal population on the coast, Namibia offers something for everyone. Highlights include some of the highest sand dunes in the world at Sossusvlei, unique cultural experiences with the Himba and San Bushmen; Big 5 game viewing at Etosha National Park. Namibia is like no other country in Africa, offering visitors an intense encounter with nature, the environment and wildlife.

WINDHOEK
Namibia’s Central Highlands are dominated by its small, German style capital, Windhoek. Set at the geographical heart of Namibia, it serves as the major road and rail crossroads and is the country’s business and commercial operations center. Windhoek has a population of only 130,000 people, but Namibia’s ethnic mix is reflected on the streets of this town. Most safaris whether overland or fly-in originate in Windhoek, which offers large, resort style hotels or smaller bed and breakfast type accommodation.

SOSSUSVLEI
Sossusvlei is one of the most remarkable sights in the Namib-Naukluft Park and the Namib Desert. Huge towering dunes, said to be the highest in the world, rise dramatically over 1000 feet above the surrounding plains at Sossusvlei, a huge pan set amid red sand dunes. The spectacle of changing colors and the lonely oryx silhouetted against the red dunes is one which visitors and photographers from around the world come to savor and capture on film. At any time of the year you may observe gemsbok and ostrich wandering over the sand. This vast expanse of dunes stretches from the Khoichab River in the south to the Kuiseb River in the north. It’s likely that this sand originated in the Kalahari between three and five million years ago. Although it’s certainly a workout, the best way to get a feeling for this sea of sand is to climb one of the dunes and have a look around.

DAMARALAND
Damaraland is the mountainous region in northwest Namibia inhabited by the Damaras and named after them. Originally, it was an area occupied primarily by the Damara people, but it soon became the home of other tribes such as the Hereros and the displaced Riemvasmakers of South Africa. The name Damara is derived from the Nama word “Dama”, meaning “who walked here”. This is because the Damara were known to the Nama people by the footprints they left around waterholes. From their vantage point in the mountains, the Damara were quick to spot resources, such as water or animals, on the plains below, and they were therefore able to be the first groups to reach these essential resources. Damaraland’s attractions include: The Brandberg, a massive mountain which shelters thousands of rock paintings; Twyfelfontein, which has some of the best rock engravings depicting wildlife scenes; as well as the Petrified Forest and Burnt Mountain. Damaraland Wilderness Preserve rewards the patient, and lucky, visitor with glimpses of the unique wildlife that survives here, including desert elephant, black rhino, lion, desert dwelling giraffe and Hartman’s mountain zebra.

SWAKOPMUND
With palm-lined streets, seaside promenades and some first class hotels, Swakopmund enjoys its place as Namibia’s most popular holiday destination. A friendly and charming town with a distinctive old world German atmosphere, it welcomes all travelers to its shore. There is an abundance of flower gardens and half-timbered houses as well as other colonial era structures but it’s the wind blown sand and the palm trees that are distinctive of Africa. Situated north of the coastal town of Swakopmund, the Cape Cross Seal Colony supports up to 100,000 Cape fur seals and is an active and important breeding ground and popular excursion.

ETOSHA
Etosha National Park is Namibia’s premier nature reserve and one of Africa’s largest. It has great concentrations of game, especially in the dry winter months, and there are wonderful views out onto the saltpans. It protects 114 species of mammals along with 340 species of birds. Originating as a shallow lake, the Etosha Pan dominates the park and is an immense, flat, saline desert of more than 3500 square miles. Now, in years of good rain, this depression becomes a temporary lagoon full of white pelicans and flamingos. Birdlife around the waterholes is good, with ostrich, pygmy falcon and all the raptors in abundance. Some of the local “specials” include short-toed rock thrush, Hartlaub’s francolin, freckled nightjar and Meyer’s parrot. Famous for its large herds of elephant, Etosha is also home to lion, leopard, black rhino and all of Namibia’s plains game including springbok, gemsbok, and hartebeest.

SKELETON COAST
The Skeleton Coast is one of our planet’s most beautiful places. Over much of the past decade, access to this private area within the National Park has been restricted. However, nearly 660,000 acres of the National Park have been set aside as an exclusive safari experience for those who want to really get away! It is wild, desolate and uninhabited…and stunningly beautiful. The area has everything, from soaring sand dunes that roar, wonderful vast, pastel colored plains, towering canyons and mountains, salt pans to seal colonies to ship wrecks. This coastline is so named for the many skeletons of shipwrecks and whales that dot the treacherous coast of this park. The freezing Benguela Current of the Atlantic sweeps up from Antarctica and meets the hot dry air of the Namib, resulting in thick morning fog, which blankets the region. This unusual weather condition brings life-giving moisture to an otherwise arid land and sustains a host of desert animals. Fresh water springs permeate the barren sands to create rare oases in the desert that sustain pockets of wildlife. Springbok, gemsbok (oryx), the rare desert elephant, Cape fur seals, brown hyena, jackal, ostrich and occasionally even cheetah eke out an existence in this rugged terrain, alongside the desert-adapted vegetation such as the ancient Welwitschia plant and Lithops, the succulent “flowering stones”. You are also able to visit authentic Himba settlements, just outside the park, for an incredible cultural experience.

NAMIB-NAKLUFT NATIONAL PARK
At 35,000 square miles in size, the Namib-Naukluft National Park is one of the largest and may be the world’s oldest desert. The prehistoric Welwitschia plants are testimony to its age and give us a glimpse into the adaptations plants and animals make in an extremely hostile environment. Areas of interest include Walvis Bay and Sandwich Harbor just outside the park on the coast, the “Moonscape” of the Swakop Canyons, Sesriem Canyon and Sossusvlei, where one will find the highest sand dunes in the world. The Naukluft mountains offer massive rock formations and heavily vegetated riverbeds where Mountain zebra, springbok, kudu, rock rabbits and Black eagles are frequently seen.

WATERBERG PLATEAU PARK
Waterberg Plateau Park covering 156 square miles, is home to several scarce and endangered species, including black rhino, white rhino, roan antelope and sable antelope. Other animals seen in this area include eland, tsessebe, brown hyena, oryx, kudu, klipspringer, and occasionally, leopard. Visitors to the Waterberg Plateau Park will also come across unique flora along with rock paintings and engravings. Three trails lead up to the top of the plateau, which rises over 820 feet above the surrounding plains. 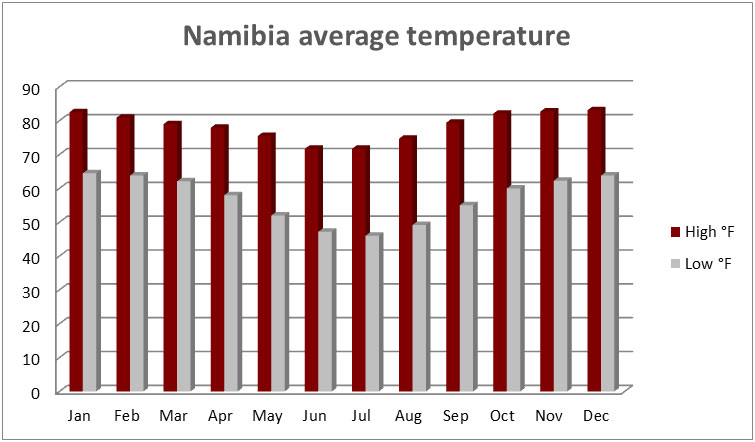 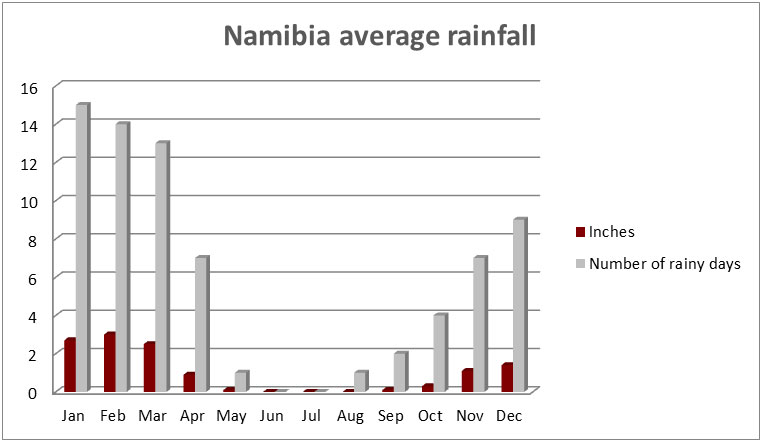 This luxury Namibia itinerary features all the highlights of this starkly beautiful land, from the wildlife filled Etosha National Park to the dunes of the Skeleton Coast and beyond. Your journey starts on the outskirts of Windhoek, at Omaanda, a luxurious lodge in a private conservancy with over a dozen rhino and an active waterhole which you can enjoy on your very first day. This experience sets the theme for the following three nights at two of the best locations on either side of Etosha National Park, Onguma followed by Ongava. Both lodges are in private concessions allowing off-roading, night drives, with the option of spending days in and around the salt pans of the neighboring National Park. From Etosha you'll continue on to Onduli in Damaraland, an entirely different landscape where you can track desert adapted rhino and elephant on electric bikes no less (or in a vehicle for those more traditionally minded). The fantastic rock art is not to be missed in this region either. The only way you'll want to leave is by the promise of something as extraordinary as Hoanib Valley and the Skeleton Coast, your next two destinations. The drive between these camps is so spectacular, we've offered a road transfer here, so you don't miss out. The Hoanib Valley is not only rich with wildlife and spectacular desert scenery, but also home to the Himba people, and a visit with them is part of your itinerary. Desert scenery is always changing, and the drive to the Skeleton Coast is a treat, ending at the Shipwreck Lodge you will be pinching yourself to make sure it's not a mirage. The ocean is great for swimming on a hot day and perfect to lull you to sleep on a chilly night. Here you can let your inner child loose and play in the dunes on sand-boards or ride dune buggies. From Shipwreck Lodge you'll fly over yet more spectacular scenery, shipwrecks and whale bones, to reach Namibia's signature red desert dunes at Sossusvlei. AndBeyond's Desert Lodge is home for your final 3 nights, where you can enjoy some of the best star shows on the planet, the highest dunes, a surprisingly large amount of desert adapted wildlife, and yet more spectacular scenery.

This 9 night / 10 day Safari is a combination of a fly in and overland safari combining some of Namibia's highlights. Namibia is a vast country, covering an area approximately twice the size of California but with a population of a mere 2 million. It is also an 'ageless land’; visible through the heritage of rock art created by stone-age artists and geological attractions such as the petrified forest where fossilized tree trunks have lain for over 280 million years. When added to the space and silence, these factors all contribute to a feeling of antiquity, solitude and wilderness. This Ultimate Namibia safari affords you the chance to experience this magnificent and memorable country in a very personal way. You will have your own professional and experienced safari guide who will enhance your enjoyment of this unique country by making it a fascinating and stress-free journey of discovery amidst very dramatic scenery.

Scenic Namibia and The Delta

Namibia is the King of wild and rugged safaris, bursting with contrasting landscapes and mind-boggling scenery. This itinerary is a beguiling mix of culture and excitement, wildlife watching and bewilderingly beautiful landscapes. Begin your journey in the middle of northern Namibia’s arid, captivating savannah, bordering the world-famous Etosha National Park at Safarihoek Lodge. Come face-to-trunk with desert-dwelling elephant, track black rhino across the sandy riverbeds, and spot the iconic giraffe of the Hoanib Valley. Meet the nomadic Himba tribe, follow them and their livestock across the desert, and learn about their customs and traditional way of life. Spend time on Namibia’s enthralling Atlantic coast and explore historic shipwrecks and watch the seals at the Mowe Colony. Explore the dunes of the Skeleton Coast and clamber to the top for a beautiful evening sundowner before slipping and sliding all the way back down! After an overnight in Johannesburg to catch your breath, you fly to Maun, Botswana and onto your safari lodge by charter flight. If you’ve been forever dreaming of an iconic Okavango Delta experience, then 4 nights at Tuludi is the perfect conclusion to your safari adventure. Floodplains stretch as far as the eye can see and the glistening waterways and emerald forests attract all the stars of the safari show.