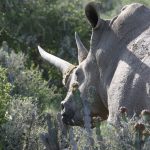 It’s World Rhino Day on the 22nd of September and while unfortunately poaching still appears to continue unabated, we did receive some lovely news that Kenya‘s total rhino population has increased from 1,258 rhinos at the end of 2017 to 1,739 rhinos by mid-2021. Despite the good news, Kenya is also home to the world’s only remaining Northern white rhino.  Following the death of the last male Sudan in 2018, mother and daughter Najin and Fatu became the last remaining Northern white rhinos in the world.
Rhinos have roamed the earth for more than 50 million years but now walk around with a price tag of about $180,000 on the end of their noses. Both the Black and White Rhino are among the rarest big mammals in Africa, and certainly the least common of the “Big Five“. Some of the best places to see Rhino include: Kruger National Park (and surrounds), Madikwe, and Eastern Cape Reserves in South Africa; Hwange and Malilangwe (Zimbabwe), Lewa and Lake Nakuru (Kenya), and Etosha (Namibia).

How You Can Help