The Great Migration – And They’re Off…. 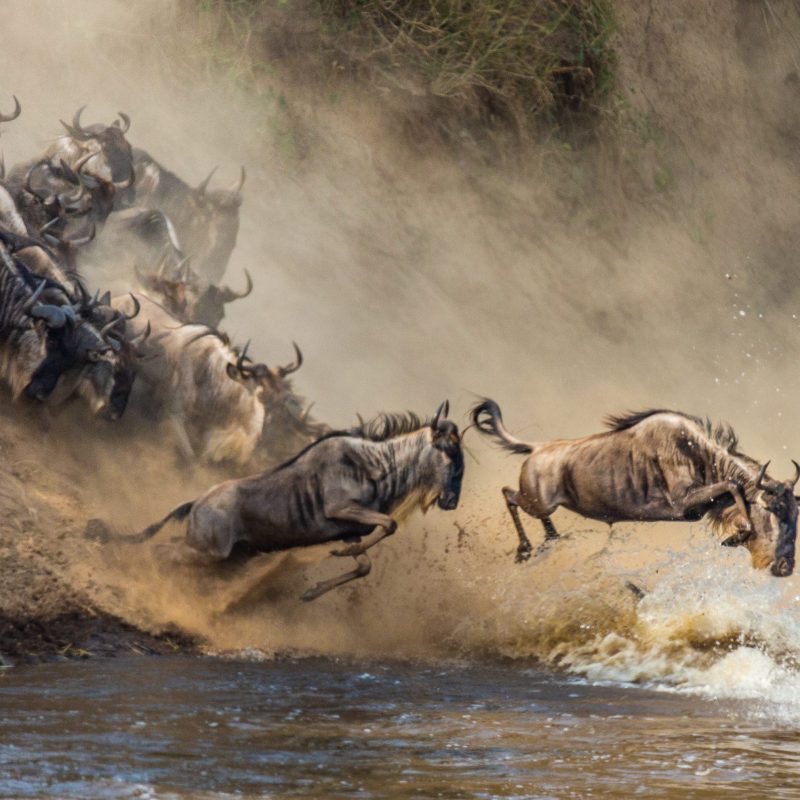 The Great Migration, the annual movement of wildebeest across the Serengeti-Mara ecosystem, is arguably one of the greatest wildlife spectacles on the planet.   Over a million wildebeest, several hundred thousand zebra, and thousands of gazelles are busy making their way between Tanzania’s Serengeti National Park and Kenya’s Masai Mara Reserve.   Fortunately, they don’t need to contend with entry requirements, but they do have to dodge hungry crocs.   This annual crossing starts on the short-grass plains of the Southern Serengeti where the wildebeest come to give birth and raise their calves between January and March.

Why do they move en masse?

Essentially, the ungulates are in search of food and water, taking advantage of the seasonal conditions.  They spend the wet season on the southeastern plains of the Serengeti in Tanzania and the dry season in the woodlands of Kenya’s Masai Mara.  Their journey runs in a clockwise direction with the animals traveling a distance of approximately 1800 miles.  It’s a tough journey, and every year an estimated 250,000 wildebeest don’t make it.    However, it’s important to keep in mind that not ALL the animals in the ecosystem are constantly on the move.  Most predators are territorial and many of the antelope species remain in one area throughout any given year.

The Greatest Show on Earth 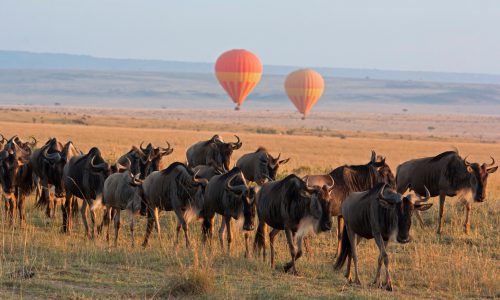 herds gather to cross the Grumeti River (Tanzania) and the Mara River (Kenya) from July through September.  As the herds cross the river, crocodiles are lying in wait for the weaker animals that can’t cope with the strong currents.   But the river crossings aren’t the only highlight.  Just witnessing hundreds of animals on the plains is a sight to behold,  particularly because they attract many of Africa’s impressive predators. Lions, leopards, hyenas and wild dog follow the herds for short periods and give safari goers an excellent chance to see predator behavior in action.   Experiencing any part of this incredible natural phenomenon is truly one of the most memorable safari experiences you could wish for.  Whether you’re enjoying watching hundreds of thousands of young wildebeest calves on the plains of the Serengeti in February; witnessing the great river crossings in July; or simply enjoying the vast numbers of wildlife on the Mara plains in August — it’s all pretty fantastic.

Where and When to view the Migration

Because the timing of the migration is dependent on the 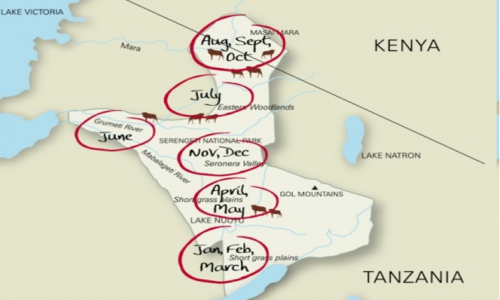 weather, its somewhat unpredictable.  The precise timing of the annual wildebeest migration depends on the rains.  An estimated 400,000 wildebeest calves are born in the Southern Serengeti during a six-week period – usually between late January and mid-March. This creates a glut for the predators but means many more survive than would from year around predation as the fast-growing wildebeest calves soon get harder to catch. Calving typically starts early in the day to allow the precious young ones to gain strength before nightfall. They can run in as little as three hours and within three days their main predator, the spotted hyena, will no longer bother with a sustained chase of a calf.  As the rains diminish and the grazing becomes sparse and standing water is used up there is a gradual movement to the better water in the North and West. As the short grass plains dry out, the herds head towards the Western Serengeti in May or June. Between June and August the wildebeest congregate in the Western corridor and prepare to cross the famous Grumeti River. In the Masai Mara they make their arrival as early as July, but they generally arrive between August and September and remain until sometime in October or November. Between the end of November and January the wildebeest gradually begin their migration from the Masai Mara back towards the Serengeti, where the whole process begins anew.

There’s still time to catch the Great Migration in Kenya this year or plan ahead for viewing the spectacle in Tanzania next year. Because we know the migration patterns and keep up to date with field reports, we make sure that when we book your safari we’re looking at the right camps, in the right place, at the right time!